ABU realized the value of imagery and the memory from the earliest days as their catalogs started with simple line drawings, sketches and quickly moved to B&W images, then Colour photographic images and later sculptures/relief works in the 70's. Please enjoy these spanning nearing 5 decades starting in the 40's.

My all time favourite image from ABU,  Napp och Nytt was produced for the  1956 catalog and evokes in me, many happy childhood fishing moments. I certainly didn't have a fine Record casting reel like this lucky boy, but for kids it was not the technology being employed,  rather  grasping the freedom, excitement and opportunity  of the moment!

May kids worldwide continue always to experience these joys!

A second image that brings back childhood fishing memories!

Friendships via fishing reminiscent of the old Rod and Real combo.

Pure enjoyment for this Lapp boy in 1960.

ABU were quick to recognize fishing could be an enjoyable family pursuit.

I just got the pictures of the bronze reliefs telling the history of sport fishing. These are mounted in the entrance to the factory in Svängsta and were made by Hjalmar Ekberg – at that time a worker at the factory. Two copies were made for Garcia and mounted on their wall at their facility in and at the Conolon factory. The original plaster models were mounted in my party room in the basement of my Svängsta home.

This was the start of Hjalmar Ekberg’s full time artist career. Jan-Erik Bergen, who took these pictures worked for ABU in many years and is now retired.

After some discussion with Len Borgstom, (quotes below)  I have learned a lot more about the working environment of A.B.Urfabriken in Svangsta.

So you can see ABU's appreciation for fine art was present from the beginning and continues to this day.

Art was not merely created on paper with pen and ink or watercolours or photographs, it was also cast in bronze as small limited edition objects d'art  to be won in fishing competitions as well as massive corporate casting, some of which Len Borgstrom has kindly invited us into his home to share with us here.

The Marlin, typical universal exaggerating fisherman and School of Salmon

I was well aware of the consideration of aesthetics by the company to produce such beautiful products but it seems the employees were immersed in fine art even when relaxing at lunch time.

"As I  have mentioned in my book, we also had an active Art Club at ABU. We invited known Swedish artists to hang their art in the ABU cafeteria so that every employee got a chance to constantly be exposed to fine art."

We all remember the beautiful Jubilee year in 1971 when the covers of Napp och Nytt /Tight Lines changed from the traditional photographic fishing images to artistic paintings. Unfortunately this approach lasted for 10 years only.

The covers of Napp och Nytt  were created  by well known artists. We got tired of doing what everybody else did – having products or some fisherman holding a fish on the cover. I have mentioned this in my book. We started with that idea 1971 with a famous illustrator Ib Thaning , . 1972 Gunnar Brusewitz, I forgot who made 1973, 1974 ,  1975  with Tom Sayers and Huckleberry Finn,  by Per Åhlin (this artist also made animated movies). 1976 was an American artist (Scott), 1977 Ralph Judell, .  1978 the name of the Swedish artist was Arenhill. 1979 an artist from Checkoslovakia, 1980 a Danish well known artist Mads Stage, I do not know who made the leaping salmon 1981, but I would think that Bengt Olofsson would know. As you know, I left for the 1978 and the last picture that I picked was Mads Stage"

ABU was also responsible for furthering the artistic careers of several of its employees.

Enjoy these fabulous images of Swedish fish, as commissioned by ABU with artist Rolf Smedman in the 70's.

A beautiful collection of scans courtesty  of Andrews of Arcadia Scrapbook.

It is the innovative work of Swedish artist Anders Osterlin

Advent-in-Arcadia continues Under the Counter Madam! with the last remaining and especially-kept- for-Christmas ABU Poster illustrated by the Swedish artist Anders Osterlin for the art and design collective known as Arbman.  Osterlin employed a technique which he himself developed of laying numerous colours over foil and was adopted for use by Andy Warhol at The Factory.  It is a priceless work of art which you can buy for only £50.  There is only one so please don't hestitate. 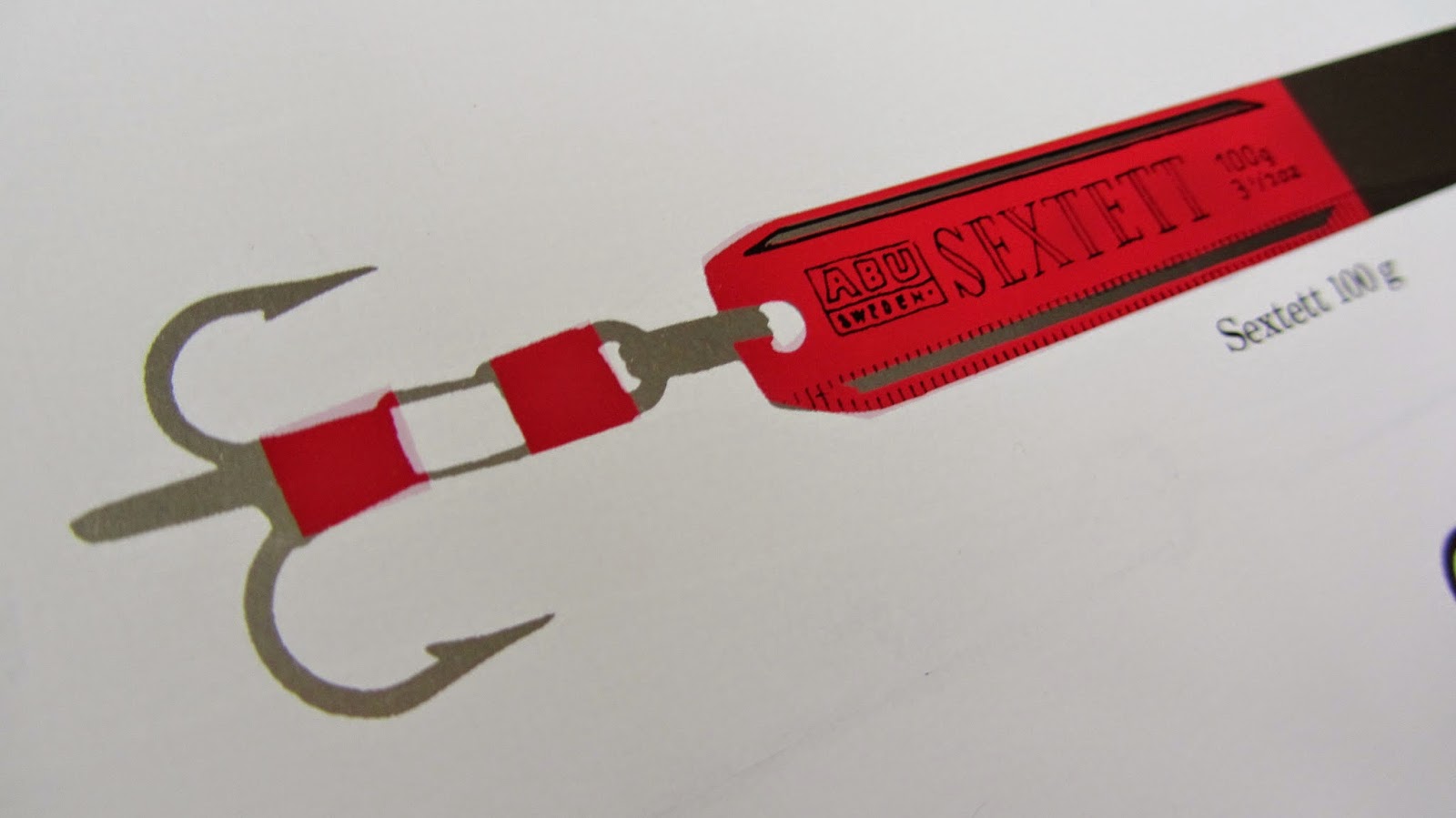 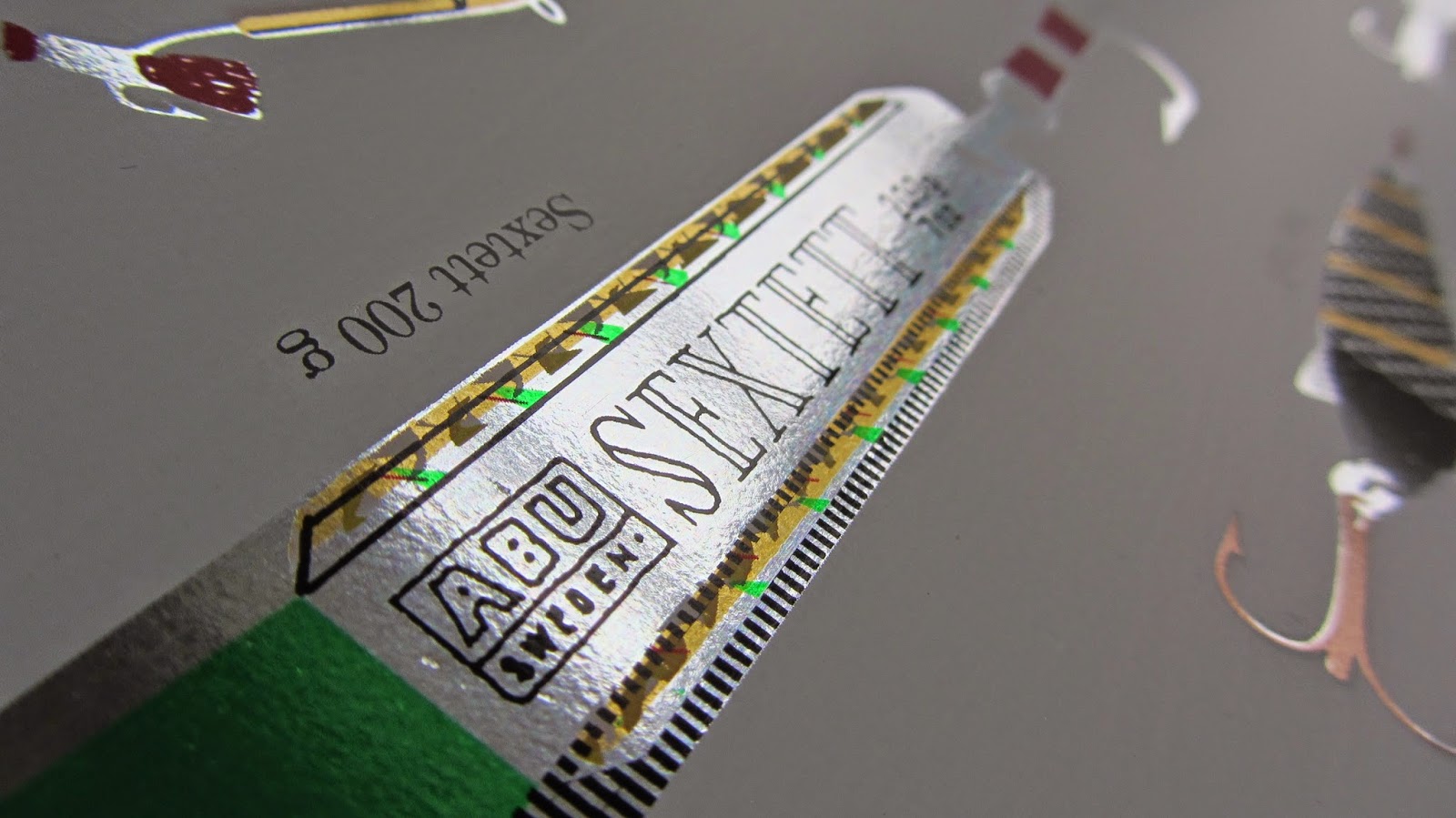 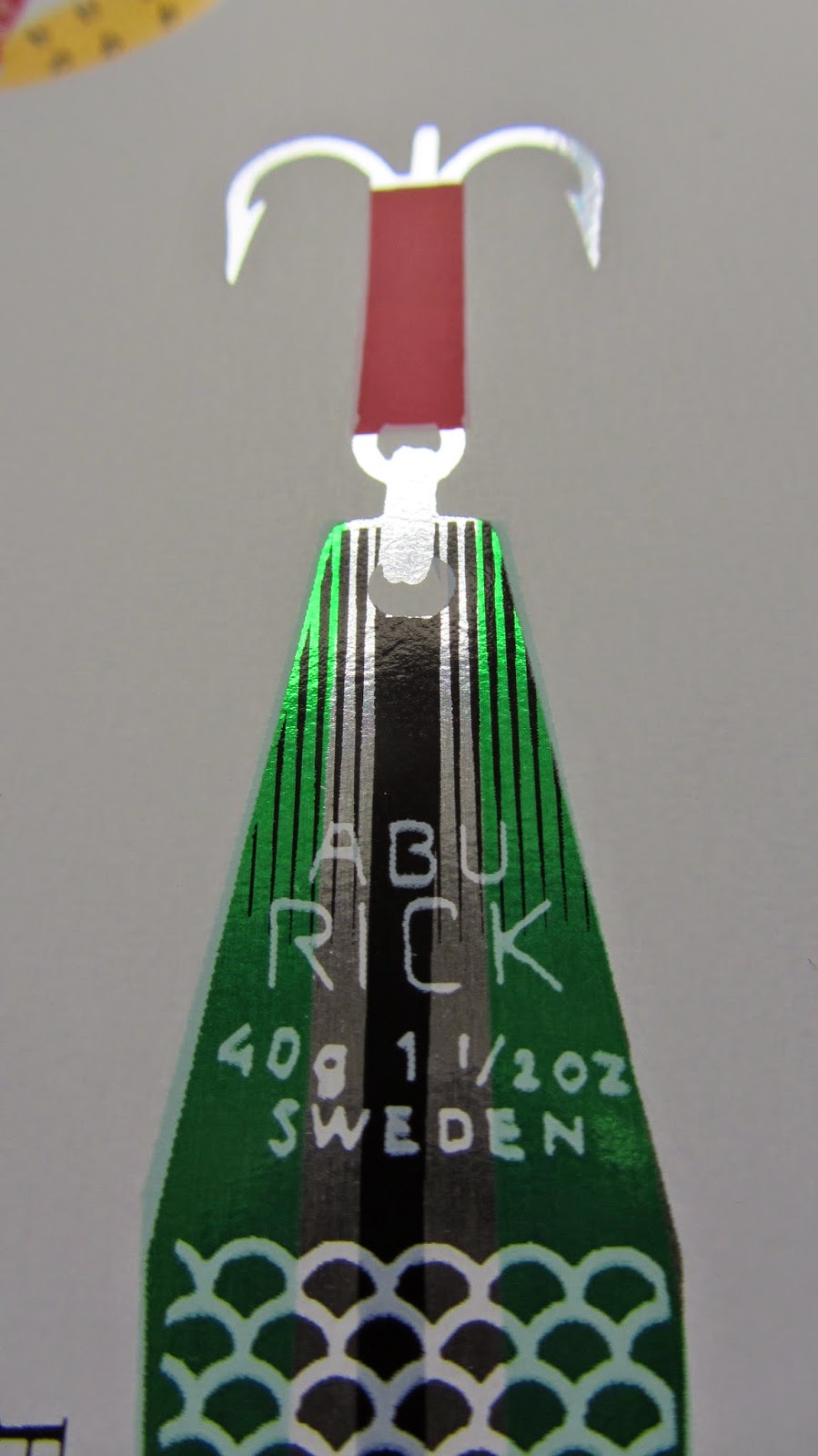 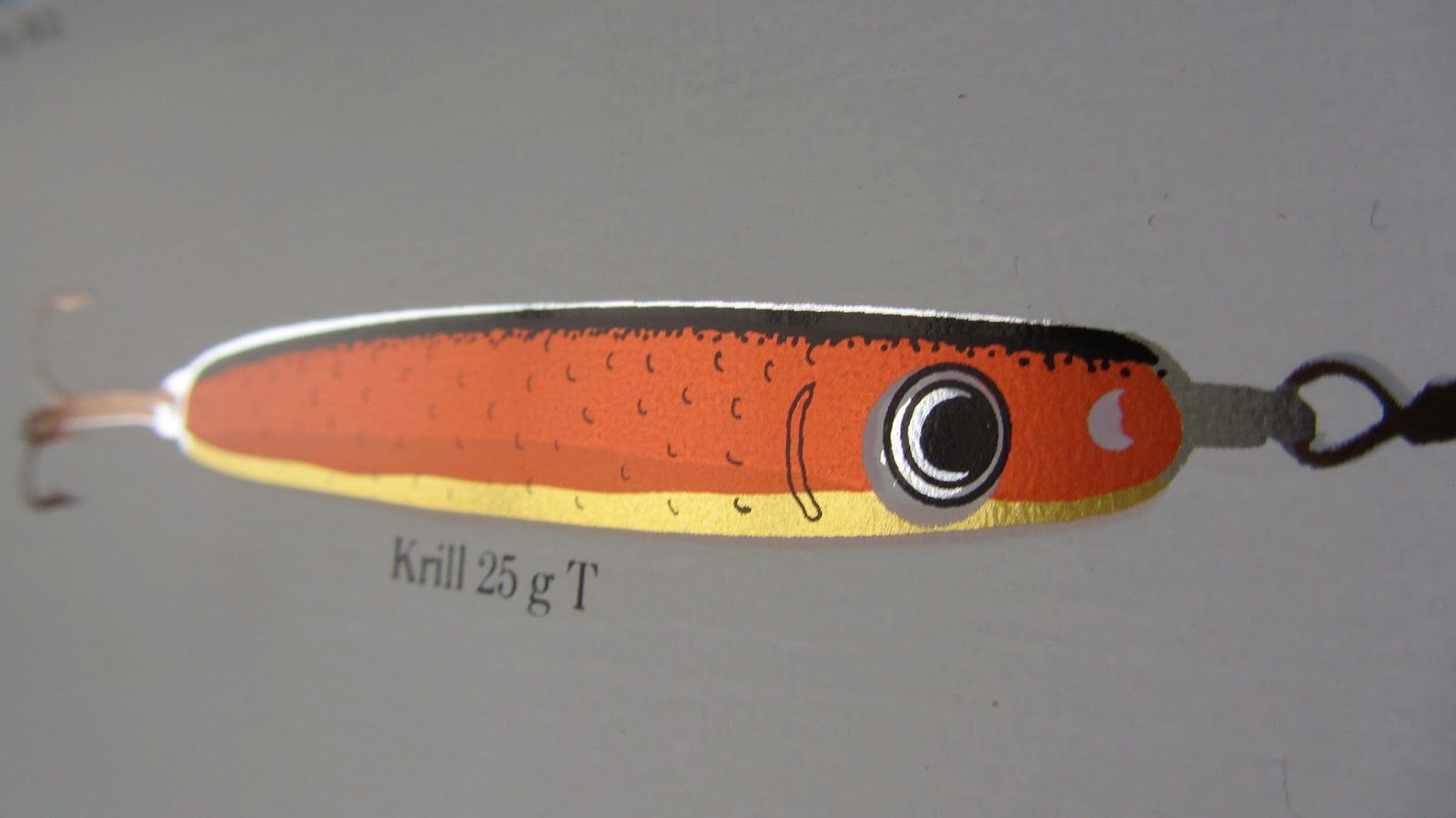 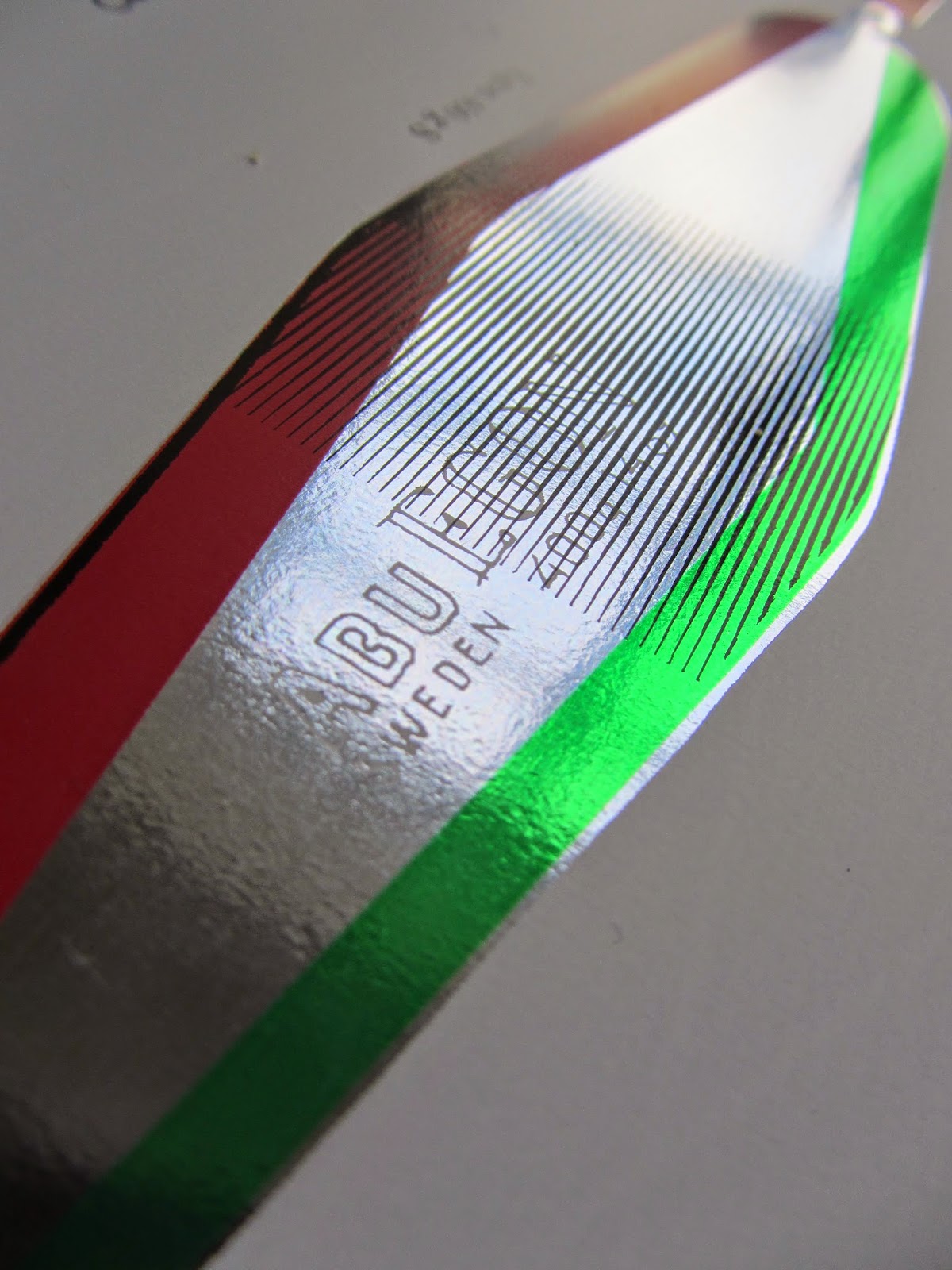 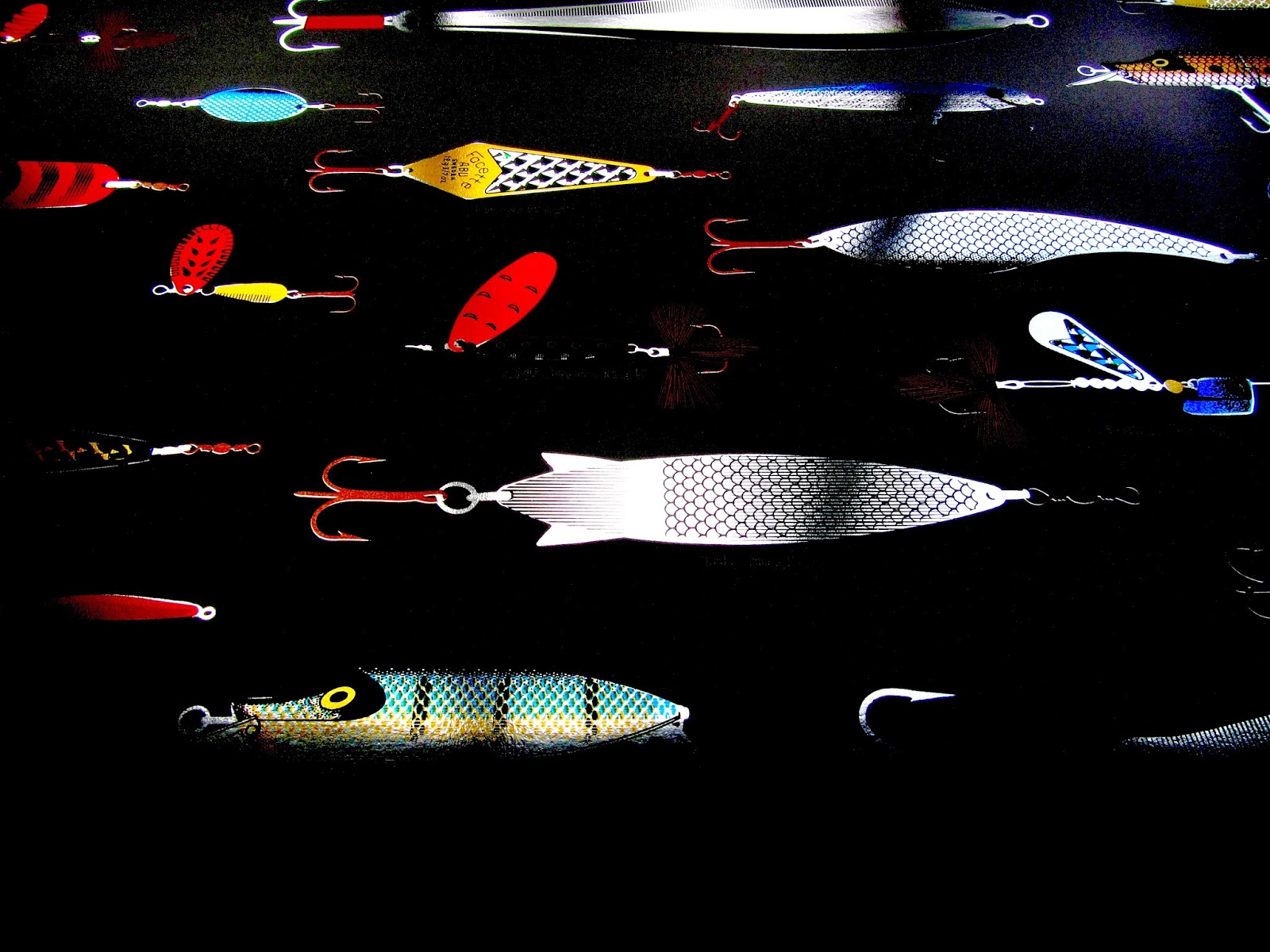 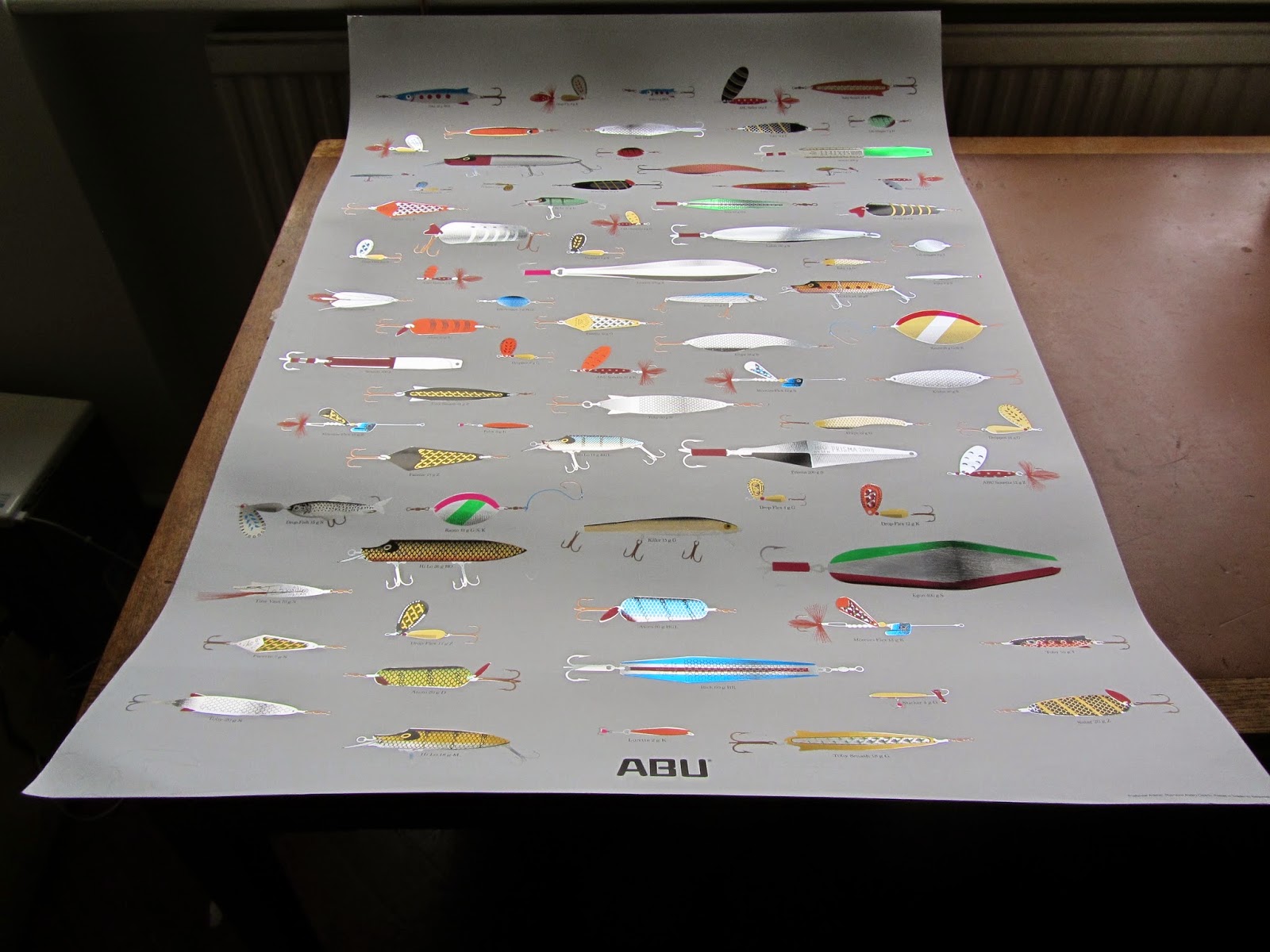 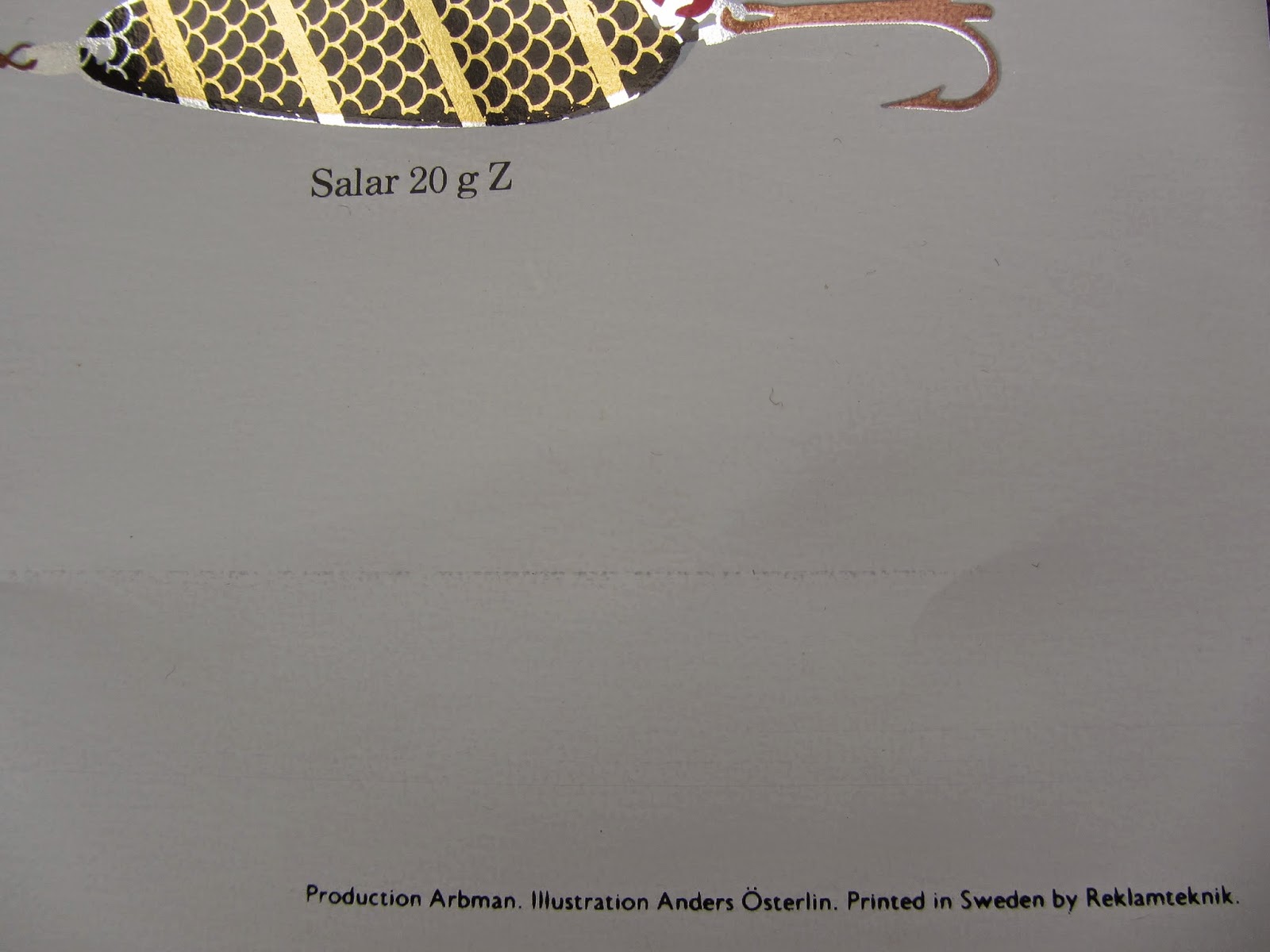 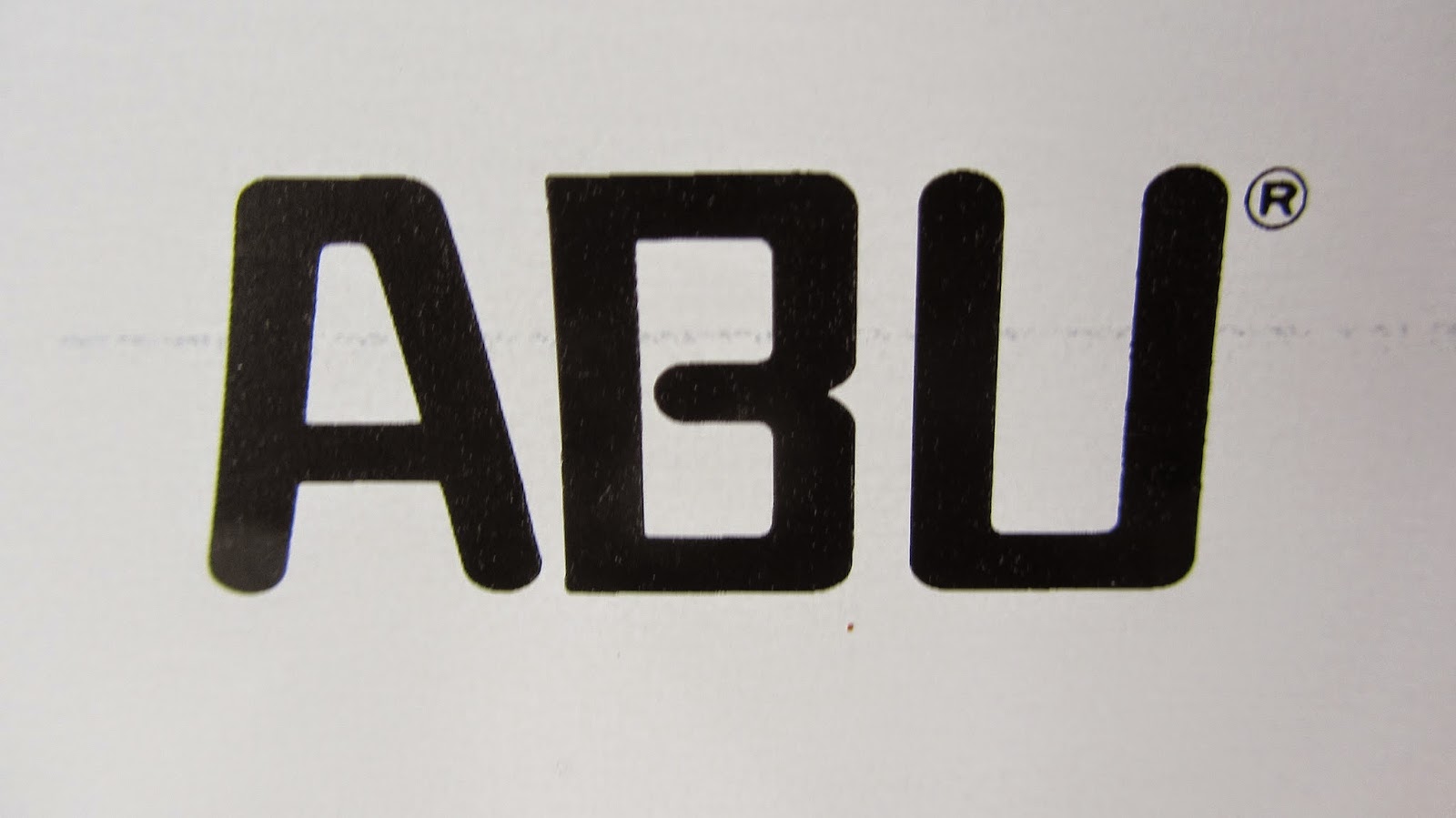 "Two employees ended up being full time sculptors. One of them (Hjalmar Ekberg) made the four piece relief showing the history of fishing, hanging in the entrance stairways to the main factory in Svangsta. The other artist (Johnny Martinsson) made the relief showing my father located outside the same factory.

ABU Art featured in other Books

Many fishing writers chose to depict the use of ABU gear, and  display their catch alongside their chosen fishing equipment, viz ABU