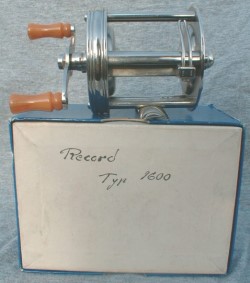 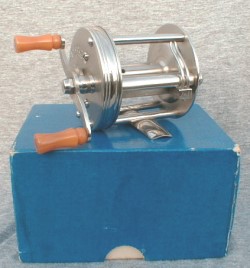 The next different type of box came to my knowledge by a Finnish guy called Mika.

He kindly shared this blue box with printed 1300 label.

The next more common Record boxes

The three Record-labelled boxes above,  are labelled in English and Swedish, and the cardboard box colours varied slightly in hue, with the main difference being in the later white outlined red-label font.

I do not yet have the Blue or Green Sea Grass type box to display. Perhaps someone can help me acquire these.
The most common boxes were the relatively plain blue ones at bottom right of the picture above.

A special leather box was made for the Abumatic 60.

Eventually, having so many reels, and a penchant to enjoy them by seeing and touching, I discovered that there was huge variety in the box packaging of yesteryear compared to the awful plastic sealed bubble boxes , convenient to today's chain store sales! So I just  hung them in an old bait net from the ceiling of my room.

The bottom left hand box was a test "mock up" called the "Morrum Cardinal". This reel was released eventually as the Suverian so this box is a "one-off production" example which was never sold to my knowledge. Interesting to see how, not only packaging can be changed at the last moment, but also the actual model name. Image seen elsewhere on site, spinning reels

Many more interesting observations and images of unusual ABU packaging to come here  in time.

Some prototype boxes to be added in future too!

If you are a person that has significantly had an effect on design/development/testing of ABU equipment over the years please contact me  wayne@realsreels.com  if you wish your contribution documented for posterity and the immediate interest of the ABU fans worldwide!