Reels are modified for many reasons;

A. the first and most concerning would be for deception and unfortunately some of us have been duped on auctions sites by unscrupulous persons whose only love for ABU, is the big money they bring when rarer models are sold. So buyer beware, check out the internals, as well as screws, handles, handle nuts, level-wind mechanisms etc

This link is an interesting insight into how complex the issue is. I do recommend Simon Shimomura's books to shed more light on concerns before buying a reel which may be suspect.

B. the second is to tweak up specifications , bushes to bearings, lighter spools, ceramic parts,  IAR in earlier reels, etc by legitimate and honest qualified ABU enthusiasts, some of who have  built a legitimate business,  meeting the needs/fantasies of demanding and discerning buyers. Good examples of these people are tournament casters. See Dave Brown's work from the UK below. 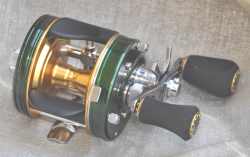 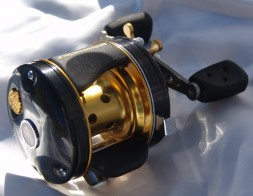 Ulf Tingstrom SWEDEN creates his own up graded  parts

C. the third group are usually those who wish to create beautiful works of art like Pure Fishing's officially sanctioned  Simon Shimomura who produce very limited numbers of stunning re-releases and upgraded reels.

D. the last group are usually owner/enthusiasts like myself who tinker for aesthetic reasons and/or functional reasons.

Most tournament casting reels are custom made rather than being bought stock standard. It is a specialized area, dealt with by enthusiasts themselves or specialists like the UK's famous  Dave Brown, who is paramount among these talented engineers. I hope to talk more with Pete Coogan, in future on his significant role in the continuing development of ABU reels.

Whilst I do not participate in tournament casting, I felt I needed to acquire one of these reels.

Dave and I have been corresponding over some months and below is some of his informative contributions.

Wayne
As promised a small piece about tournament reels,
i have been converting ABU Ambassadeur reels since the mid 1980,s my first attempts were simply removing the levelwind mech and associated gears and adding a "CT" bar to increase the speed the spool can run at and also allow a great amount of grip on the spool that a top cross bar cannot give. This was based on a very rare version of the ABU 6500c that ABU built in limited numbers and called the 6500 CT ,being unavailable it was simply copied using parts made by myself ,around the same time the Ultramag range of reels were being used more and more for casting however in standard form were pretty useless ,but with a few modifications were fantastic casting reels and are still popular over 20 years later .

Around 1990 ABu re introduced the rare Black 6500 Ct ready to use tournament reel this time using its Ultracast spool and using a pair of fibre brake blocks for braking soon after they brought out an almost identical model the 6500 CT Rocket this lead to a variety of similar models the 6500 Ct Sports Rocket in both original and MK11 versions then the 6500 C3 CT Elite then the 6500 C3 CT Mag Elite .All of these models could be cast without modification but it didn,t take long before small adjustments and improvements were being made ,usually the sideplate were drilled and either a single rare earth magnet and adjuster was added or a centre mag conversion fitted were a platic mag ring was fitted that operated by a knob that ran through the center of the sideplate .

The majority of the reels i currently convert are the 1980,s type XLT or Ultramag type reels ,they are completely stripped down then all the levelwind mechanism and plastic cage supports removed i then fit my own special polished one piece aluminium bar this hold the cage rigid and allows a perfect grip of the spool. The sideplates are then machined to accept either a single rare earth magnetic brake or a captive adjuster that operates a nylon mag ring holding several smaller magnets .All of these modifications are for one reason and that is to give a caster the ultimate personal adjustment required to enable him to cast as far as possible and yet still have full control over spool speed .The factory magged reels don't have this adjustment and so can hold a casters distance back its also nice to know that the magnets can adjust the spin time of a reel anywhere from 5 seconds to 3 minutes all achieved by one magnet .

Dave has kindly offered this information on Tournament Casting in general.

I have some more similarly "touched" friends, whom I am sure will soon want to contribute their personalized ABU reels.

Please be patient and enjoy as they appear and do contribute!

If you have any others not listed above, that are unneeded  or doubles in your collection and are available for a reasonable fee, I would be very pleased to hear from you.